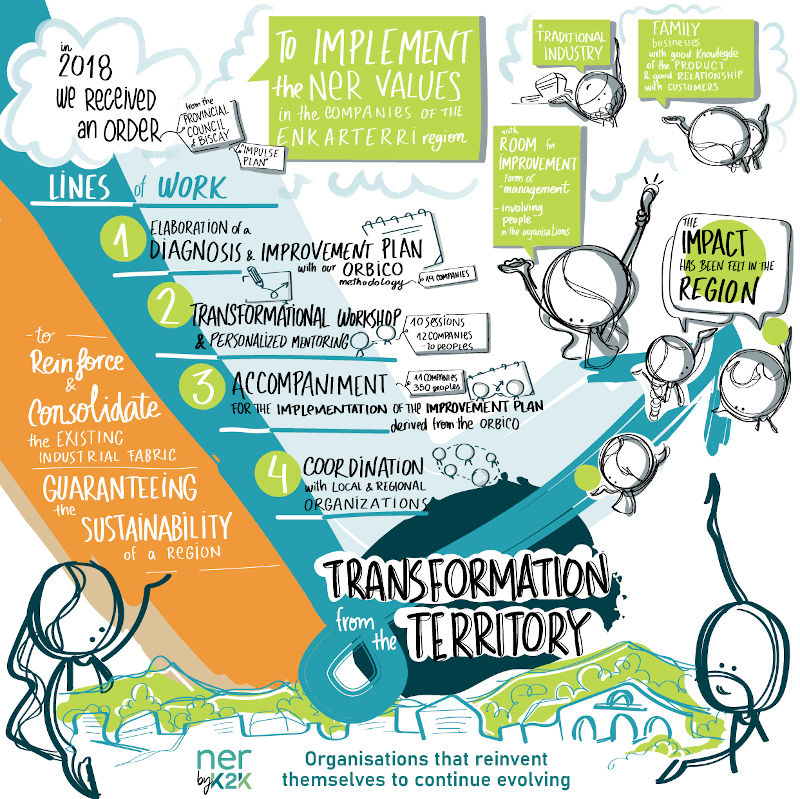 In this eight-part series, we are sharing the keys of our evolution over the past few years. First, we told you about our exploration, our sources of inspiration and the time when we chose to look up. Then, in Part Two, we described our willingness to share. In Part Three, we reviewed how we had redesigned our services to meet new demands. Now it is time for Part Four and a subject we had never discussed before.

The year 2018 was very important for K2K Emocionando. We were commissioned with an exciting task: implementing the values of the New Style of Relationships (NER) in businesses in the region of Enkarterri, as part of the Impulso Plan, promoted by the Provincial Government of Bizkaia with the cooperation of town councils and local agents. It was the first time they asked us to carry out a project to strengthen the regional business fabric while ensuring sustainability.

Enkarterri is the largest district in the Basque Country, comprising ten populated areas and 32,000 residents. In the second half of the nineteenth century, it was a major hub of the Basque industry. In recent years, it was badly affected by the crisis, which brought development to a halt, hindered business competitiveness and increased the level of unemployment, stirring uncertainty. We faced the challenge by dividing our work into four courses of action:

This project enabled us to test our broader range of services, as described in Part Three, which we then brought to Madrid, Catalonia and Portugal. The companies that took part in it were mostly traditional businesses, including metal fabrication facilities, die-cutting companies, machining manufacturers, assembly facilities, quarries and leading electronic companies. Most of them were family-run businesses with a deep knowledge of the products they offered and good customer relations, but also with ample room for improvement in areas such as management and staff engagement.

The project had a positive impact on the organisations and the region at large. At the time, we collected the voices of the participants in a video that could then be shown for inspiration and encouragement, as evidence that, in order to change your ways of working, you do not need to be a large corporation or a tech-based company in Silicon Valley.

A Radical And Proven Approach To Becoming A Self-Managed Company

Frederic Laloux: Trump is a distraction – and new kinds of organisation show a better way